On 16th November, after the 2013 AGM, the Council was pleased to confer the honorary title of Fellow on our retired Registrar John Smith - FSAPH.

John has been all his life a member of the Salvation Army, and still plays in two of its bands and sings in its choir, in Troon.

He ran, for many years, a Health and Safety Advisory Consultancy, working throughout Scotland including the Hebrides.

He and his wife Anne set up and ran for many years a prominent College of Alternative Medicine, teaching Reflexology and Aromatherapy to almost a generation of people in South-West Scotland. 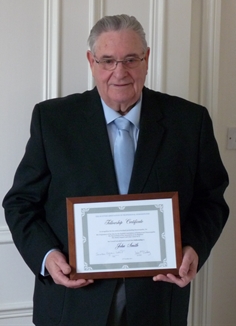 Then, of course, he was a homoeopath who trained at the Scottish College of Homoeopathy and has only now just retired, after transferring his practice to a local GP. Alongside his Health and Safety consultancy, John also ran a popular homoeopathic practice throughout Scotland.

And it was John who, some 14 years ago, proposed the formation of a Scottish association for professional homoeopaths. This was partly because the Scottish Health Service was moving gradually away from the English model, after Scotland got its own Parliament, and partly because attending CPD in England meant long journeys for Scottish homoeopaths.